🍁”No one had the slightest suspicion of what beautiful things she had seen; no one even dreamt of the splendor in which she had reached heaven on the joys of New Year.”  – Hans Christian Anderson🎄

Hans Christian Anderson, the master of story tales contributes a bittersweet and sobering story to mark the period between Christmas and New Year special. The tragic short story paints a dismal picture of the life of a young impoverished girl trying to make a living out of selling matches. In the open, cold and frigid streets, she wanders barefoot in snow being wary of going home to an abusive father who will spank her if her efforts to make a sale of the matches does not come to fruition.

It’s New Year’s eve and the little match girl carries a bundle of matches in her apron ready for sale, but nobody observes her. The ignorant rich kids just pass by the street and nobody has bought anything from her for the whole livelong day. The little maiden with her tiny naked feet (since she lost her old worn out slippers as well) touching the white streets strolls about and observes the houses all around. From the red and green decor on every exterior to all the translucent windows from where she could see candles gleaming and perhaps somewhere it smelt deliciously of roast goose, she could tell from several senses that it was indeed New Year eve!

It is almost the dead end of the day and she has not earned a farthing of money for she hasn’t sold any of the matches that she had. She sits on the staircase end of one of the houses and not knowing what to do, it just gets colder and colder and she finally concludes that a match might offer her a world of comfort. She strikes a match and along she takes herself to a story of utopia. From striking several matches up against the wall, the blazing and burning fire of merely thin wooden sticks provides her with a blessed influence. The little burning flame takes her to an array of burning yet gleaming candles that surround a roast goose, the same one that she had smelt in one of the houses across an open window earlier in the day. Complemented with the goose is a hot steaming pie with an apple filling and dries plums. The little girl grabs a knife and fork and is about to dig in, but alas! the match goes out and nothing but a cold damp wall is what is left behind in the background! On her next outing, through another lightened flame she observes an inspired burning array of fairy lights wrapped around a beautiful Christmas tree with pretty decor and gifts around the corners and stars painted in the sky. But with time the tree rises, going farther away from her and disappears  in thin air and so do the shining stars that fall down in a long ending trail of fire as another match is burnt out.

She has a last matchstick and she is at the end of the road, but she is not ready to give up on her dreams. She lights up the last one, this time the match shines with brilliant light, brighter than ever.. and in that light she sees her grandmother, deceased once upon a time, the only person who ever loved her in her entire lifetime. Her dead grandmother is a true star, the star that when falls does not lose its flame, but in fact is a gleaming soul that ascends to God. Her grandmother looks ageless, radiant and bright, so mild with an expression of love which triumphs above all gleaming objects existent on the earth. The little match girl requests her grandmother to take her to heaven, where there is no anxiety, no hunger, no sadness, where they can be with God, and together they fly away to their heavenly abode. 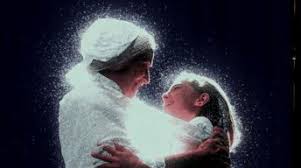 Meanwhile on one of the coldest streets on the earth in the frigid hour of dawn on the day of New Year, lay the poor girl’s frail body, with rosy cheeks, her face still having a smiling mouth, leaning against the cold wall, her death was marked on the last evening of the old year. The passersby on the street never really cared for the girl as some looked on and ignored her even during her last hours, but not even having a slightest suspicion of the new world she had just entered and the joys she would be experiencing on the day of New Year.

Two things that I take away from this story: