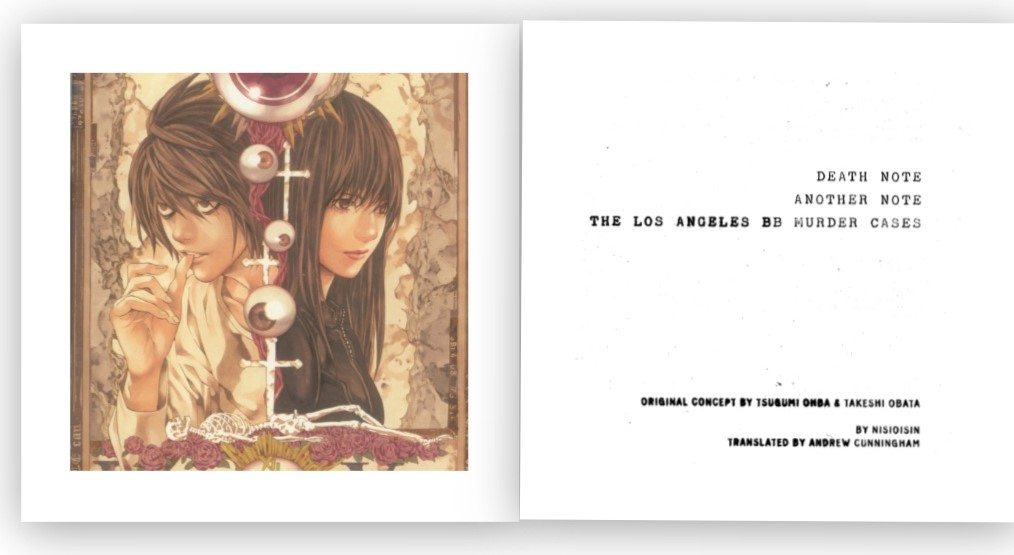 There are certain fandoms on my list that I just always wanted to write a review on, celebrate it and spread it across the masses without any individual beneficial purpose.. just for the love of diligent and respectable work .. but I have a long wish list of putting in my opinions in form of reviews of some series simply because I was concerned that I might not be able to justify something i might be a die-hard fan of! Death Note- the manga show was high on the pedestal in that sense!

And then two years of staying an ardent follower of the show, a good friend of mine showed the doors of light to much more content existent in the Death Note universe.. This prequel “The Los Angeles BB Murder Cases” is my first baby step as a great comeback into the world.

Death Note was originally written by Tsugumi Ohba and illustrated by Takeshi Obata and my God.. I love both the script and character illustrations! The soundtrack and background score is something I can’t even think beyond.. perhaps the very aspect that keeps me thinking for long about this anime! Overall, as I said I wouldn’t know how to give justice to such brilliant work.. but here I am giving a review of its prequel!

If you haven’t watched Death Note, don’t dare take a step beyond here. Normally the sequence being that the prequel comes before the events of the show, but the author has assumed that you have watched the show! The rules of the Death Note, history of the Shinigami, existing personality development of some characters, secrets about L, the mystery of Wammy’s House etc. are some points that are assumed are already well known to the reader.. So if you already feel lost now, take a step back.. watch the amazing show and get back here before you tune in to the prequel light novel written by Nisio Isin!

The light novel series is composed of few but very significant characters: L – The Detective, Naomi Misora and Raye Penber – two FBI agents, Beyond Birthday – The Killer and three victims with quirky alliteration initials to spice up the clues of three well connected individual cases. Mello narrates the story of L’s first encounter with Naomi Misora in America and their professional relationship towards cracking these multiple murder cases, nabbing the killer and finding closure to this entire series of events.  The cases have some connection and a lot of clues are revealed involving Wara Ningyo dolls, number patterns, reason for choice of victims and nature of gruesome killings. During all this, the narrator takes much of his time describing lesser known details of ‘L’, describing how perfect this detective was, the world’s best! All potential detectives in the Wammy’s house wanted to surpass him and each of whom were assigned a colloquial singular alphabet against their names. Being like ‘L’ was like chasing a mirage: the closer anyone got to his capabilities, the farther away he got ahead of anyone in no time! ‘N’ or Near was ‘L”s successor, but ‘M’ or Mello (the narrator himself) was the challenger.. but most importantly there was a predecessor to ‘L’ who wanted to eliminate him and get ahead of anyone and everyone in his path.. a letter that comes before ‘L’ that the perfectionist detective was ready to battle against..

A lot of sense is made and lot of answers come up in this with regard to incomplete or suspense related events that are shown very briefly in the show to keep the audiences pondering till the edge of their seat! The most important (atleast to me) was the storyline of Naomi Misora, why ‘L’ preferred to be called as ‘Ryuzaki’ by his colleagues, how possibly ‘L’ would have come to be known about the Shinigami world etc.

I have to confess I would find it hard to justify myself to rate the show or any aspect of series related to Death Note! I would kill to figure out more versions of this brilliant anime and I am on my way expanding my knowledge! I will leave you here with a much valuable life lesson that is mentioned in this very book that can be seen with two different perspectives of light: One, in very generic terms and another very much in context with the Death Note universe:

“The most intelligent people disguise the fact that they are intelligent. Wise men do not wear name tags. The more people talk about their own skills, the more desperate they are — their work should speak for itself!”